First of all, my apologies for not posting sooner, ive been spending most of my time getting a number of early builds shifted out, the idea here is to work on bugs before features, once I get to the point where the bugs are sorted, I add some polish, assemble a build, then start adding some things from my feature list.
This way the problems in the build never stack up beyond my ability to controll them, and thus far the build is feeling pretty solid.
While I am still using placeholders for the time being, I have got the jumping to a point I am happy with and the dragging/lifting mechanics are working very well, the build can actually be considered as a full game now, with animation, mechanics and goals.
I also have support for multiple levels now, although I have not developed any more than one level.
My editor is also suitablaly developed to fit the build.
I have made a number of significant improvements to the editor, this has been developed as a seperate game state, therefore allowing me to engineer a level, save then play the level, then go back to editor and make changes within a few seconds of one another, this maximises turnaround time and means that everything just becomes easier.
My more recent improvements, are to the "stacking" mechanic, this allows players to lift objects onto each other in order to solve problems: 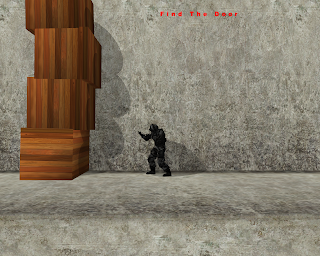 As you can see here its basically good enough, it will never be absolutely perfect because of its implementation, for efficiancy and speed and also to give maximum flexibility, the collisionmeshes used for the body's on these crates is actually made up of small spheres, since spheres are so easy to perform collision detection and physics on, unfortunately this also means the crates do not represent a physically accurate model of the visual representation so there will allways be innacuracys, but for the ammount of freedom this provides Chris and I as developers its worth the trade off.

You can see the character there, getting all of the animation blending to work properly was quite a challenge, and I intend to write an article on how I did it in the future, its comically simple once you figure out the trick.

Also the same with my new implementation of jumping; the hard thing is getting the jump to appropriately work with the physics engine, in a 2d game with simple collision detection and responce, the world state is far more robust, but with a physics engine, nothing should ever have its state changed directly, i.e. position, it causes the future state of the world to be inherantly unpredictable, and thus unstable.